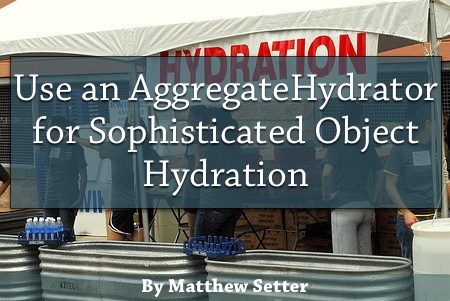 Each of these do a good job of hydrating a simple object, in an increasing level of sophistication and flexibility, from ObjectProperty through ArraySerializable. However, what if the object you’re hydrating is itself composed of several objects, built via something like the composite pattern for example?

Let’s say, for example, you were creating a shopping cart system and were building a user object to model a user in the shopping process. Such a user object could be expected to have the following core details:

Focusing in on the addresses for a moment, a shopping user usually has two, one for their home, or shipping, address, and one their billing address. These can contain the same information, or be different, but are required to ensure that the goods can be paid for and delivered.

So how would we model and hydrate such a semi-sophisticated entity? If you’re not concerned about database normalization, then you might have a one-to-one mapping between the object and the table in which the information is stored (assuming you’re using a database as your data store).

But if you’re doing even a bit of normalization, you’re likely going to have at least a user table and an address table. Then, you might have a join table which mapped a user to their addresses, potentially also storing an address type as well so as to easily differentiate between the multiple addresses stored for the user.

That’s the data storage side simplistically taken care of. What about the object space? What would the objects look like? How would they be composed? To keep it easy to model and manipulate from a programmatic perspective, you could construct the objects as in the UML class diagram below. There you can see that a user object can have one or more address objects. 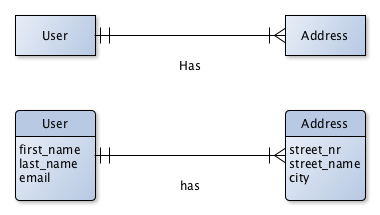 Taking this approach, we can maintain some database normalization, and also create objects which has a good respect for separation of concerns. However, whilst we’ve achieved a good data and class design, it’s not going to be too straight-forward to hydrate these objects.

So the question then is, how do we make object construction and hydration easy as well? Good question. To answer that, I suggest that one of the following approaches. Firstly, you could create a query on the user table, performing a right join on the two address tables, so that if the address wasn’t set, you’d still have user data.

Note: You’d have to alias the address columns appropriately so that in the aggregate result, it’s clear as to where each columns came from.

Alternatively, you could query on the user table, joining it on the link table to get the respective address ids. This would retrieve the core user details. With that information available, you could then invoke a method on an address TableGateway to retrieve the shipping and billing addresses, providing the user id to filter on.

If you took that approach, the underlying queries might look something more like this, where the second query is using a named placeholder:

Let’s assume that the latter approach is the one you chose to take. How do you make the process as simple, maintainable, and testable as possible? Well, besides being a lofty set of goals, is it even achievable?

Until recently, I wasn’t sure it was. I’d been building everything separately, the long way, using the base three hydrators in a rather convoluted manner. That is, until the need pushed me to find a better solution.

The solution I came across was the AggregateHydrator. If you’ve not heard of it, quoting directly from the manual:

You typically want to use an aggregate hydrator when you want to hydrate or extract data from complex objects that implement multiple interfaces, and therefore need multiple hydrators to handle that in subsequent steps.

This description neatly describes the situation I found myself in. When I retrieved a user via its TableGateway, using a method such as findById etc, I wanted the returned object to be fully hydrated with all the associated sub-objects already hydrated as well.

But, at the same time I didn’t want to pollute the concerns of the user TableGateway with knowledge or functionality of address details which it should be concerned of. So here’s how I approached it.

Now you might be thinking that that’s a lot to cover in one post, and it is. So I hope you’re ready. Oh, before we go on too much further, I think it’s essential to explain why this is an approach worth pursuing.

You might be wondering why anyone would go to all this effort in the first place. Here’s why:

Stick with me and you’ll see why soon.

The User entity is a simple entity object which has protected properties for all, or most, of the properties which you might expect to be available when working with a user. It also has an addresses property which is an SplObjectStorage object, which will contain two AddressEntity objects. Setter and getter methods are available for each property.

Note: The reason for using an SplObjectStorage object is that it makes it easy to manage a list of objects using PHP’s native classes, instead of having to code yet another class to handle it.

As with the user entity, the address entity is a simple PHP class which has protected properties for the properties which it will store. It also has setters and getters for manipulating each one.

Now for the user hydrator. This class extends Zend Framework’s AbstractHydrator, which requires that the hydrate method be implemented, which you can find the definition of in Zend\Hydrator\HydrationInterface.

The UserAddressHydrator is a little different, but similar. This one has a constructor dependency of an AddressTable TableGateway object, which we’ll see later. During hydration, as with the User object, we first check if the object is a User entity. If it is, we call the TableGateway object’s fetchByUserId method, passing in the user id provided in $data.

Now for one last hydrator, the UserHydratorFactory. This is responsible for instantiating an aggregate hydrator which uses the UserEntity and UserAddressEntity hydrators to fully hydrate a UserEntity.

It’s a callable by definition of the fact that it implements the __invoke magic method. This, just for the sakes of simplicity, calls a protected method prepareHydrator, passing to it the AddressTable TableGateway object which it was provided.

Now that we have all of the classes created, we need to ensure that they’re registered with the ServiceLocator. If you’re using Zend Expressive then in config/autoload/dependencies.global.php, ensure you have a reference in the invokables array, as I have below.

The code for this article was developed using Zend Expressive. But if you’re working with Zend Framework 2, then add the line above in config/autoload/global.php similar to what you see below.

I’ve covered how to do ServiceManager configuration in a previous post. So if you’re not familiar with the process, definitely check out that post, as you’ll need it to follow along with this section.

That being said, we first retrieve a UserHydratorFactory service from the ServiceLocator, passing an AddressTable service to it when calling its __invoke method. The rest of the instantiation is the same as I’ve covered previously. A new HydratingResultSet object is initialized, passing in the AggregateHydrator object and a rowObjectPrototype, which is a UserEntity. This is then passed to the initialization of the UserTableGateway object as the third parameter.

Now, when we retrieve data from tbluser the objects returned will be transparently hydrated with any linked addresses for us. We will never need to do it manually anywhere else in our codebase.

And that’s how to use an AggregateHydrator to perform sophisticated, even complex hydration of objects in your Zend Framework applications. Sure, there’s a bit to think about, and a number of moving parts. However - when done correctly, hydration is all done for us, in one central, testable, configurable location. All of the objects are testable with proper separation of concerns.

Have you used AggregateHydrators before? What’s been your experience? Could you see yourself using them?