Save Time Instantiating Mezzio Handlers With the Reflection-based Abstract Factory 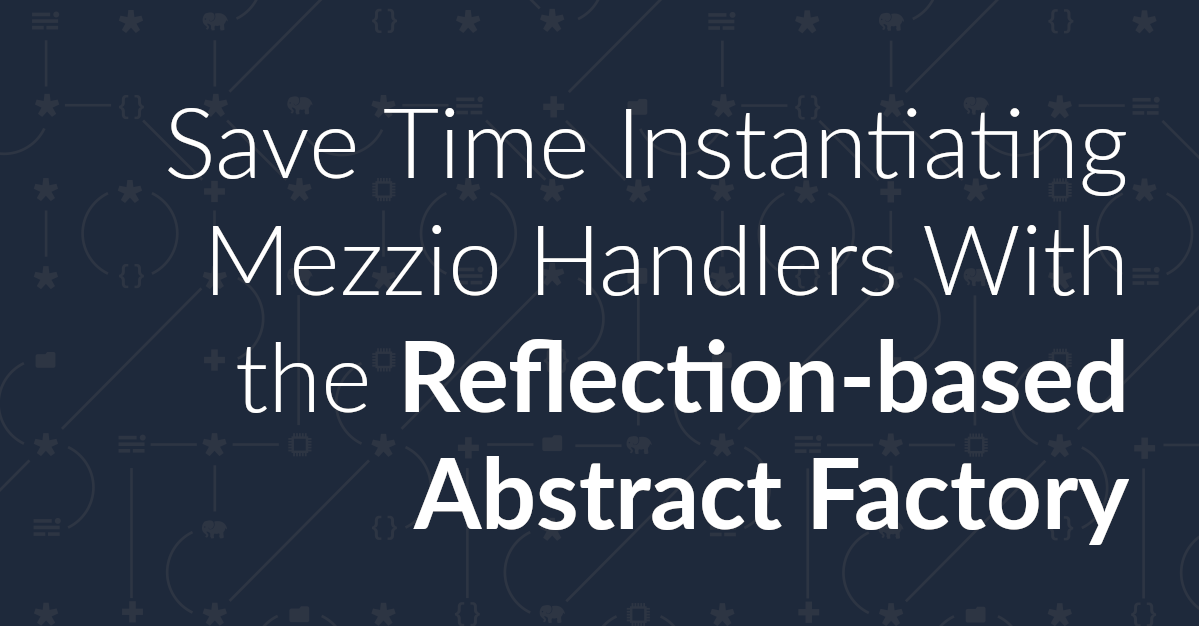 If you’re creating handlers in a Mezzio application and don’t want to spend time building and maintaining custom factories to instantiate them (or other classes), you need to know about the Reflection Factory.

Recently, as you may know, I’ve been building a small user authentication module for an upcoming tutorial for a European magazine. As part of developing the application, I followed my standard approach of using Mezzio’s Command Line Tooling to quickly bootstrap handlers and middleware, such as by running the following command.

If you’re not familiar with Mezzio’s command line tooling, the above command generates a PSR-15 Handler class and a factory to instantiate it, registers the handler with the application’s DI Container, and creates a view template for it.

Using the command greatly simplifies Handler creation, as it avoids a large number of potential mistakes and bugs that may creep in when creating them manually. Moreover, you know that the files will be created in a consistent manner. However, while the command brings a lot of efficiency to Handler creation, depending on your use case, it may create more work than necessary.

This might seem like a strange thing to say, given my support for the command, but hear me out. Perhaps you’re creating a Handler, and it’s rapidly evolving as the needs themselves evolve. For example, you might be building a Handler that performs user authentication, retrieves content from a social media service such as LinkedIn or Twitter, or provides some other service that requires an ever-growing number of constructor parameters.

In this case, as you iteratively refactor the Handler class you also have to iterate on the Handler’s factory. Otherwise, an exception will be thrown when attempting to retrieve the service from the DI container or when attempting to use it. Yes, it’d be great to have requirements mapped out clearly and concretely ahead of time. But that’s not always practical nor possible.

At first blush, this might seem like a ludicrous thing to say, no? After all, if there’s no factory for the handler, how can it be instantiated? Fair point.

However, if you revisit what I said, I only said skip creating a custom factory. You still need a factory to retrieve the constructor parameters so that the class can be instantiated. But that doesn’t mean that you have to create said factory yourself.

If your Mezzio application is using laminas-servicemanager as it’s DI Container, you’re in luck. Enter the Reflection-based Abstract Factory (or Reflection Factory). This class uses PHP’s Reflection API to introspect which constructor parameters are required and, where possible, retrieve them from the DI Container (if they’ve been registered).

Given that the class uses reflection, you may have concerns about application performance, as the Reflection API does have a performance overhead. It’s a fair concern for a production application, but during development, I’d suggest not.

Remember, the recommendation to use the Reflection-based Abstract Factory is only during initial development. That way your energies can stay on the Handler’s logic not instantiating it.

Then, after the Handler’s state becomes stable enough, you can use a more performant factory, such as a custom one or perhaps the Config Abstract Factory.

Some things to bear in mind about the Reflection Factory

That said, there are a few things to bear in mind when using it:

How do you use it?

Using the Reflection-based Abstract Factory instead of a custom factory requires two steps:

Here’s an example of how to do so. In the relevant module’s ConfigProvider.php file, add the following configuration to the array returned from the getDependencies() method, as below.

Then, add your Handler in the factories element in the array returned from the getDependencies() method, and set the ReflectionBasedAbstractFactory to instantiate it, as below.

If you’re rapidly prototyping application, I highly recommend using the Reflection-based Abstract Factory so that you can concentrate on the Handler’s logic and not worry about instantiation, until the code’s semi-stable.

I’d love to know what you think in the comments.