Tue, Nov 29, 2016. Filed Under: Software Development.  Estimated reading time: 11 minutes. by Matthew Setter.
How well do you really know Composer? Do you just know composer install, update, and require, and some of the composer.json configuration? Or do you really know it? In this series, you’re going to take your skills to the next level; starting with the command-line. 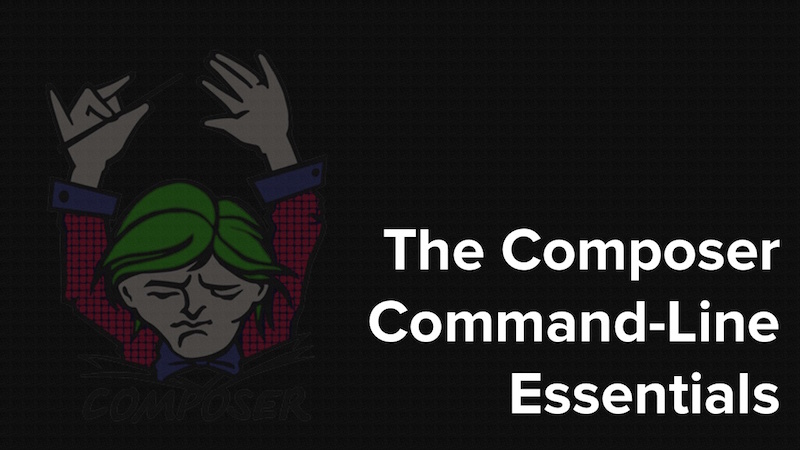 But I Already Know Composer

I know that a series on Composer might seem odd. But, as Composer’s been a part of PHP for so long now, I feel that it’s something which most of us take for granted.

Don’t Miss The Rest Of The Series

It’s revolutionised the PHP landscape, making it easier than ever before to build great software in PHP. But do we really know how to get the most out of it. For that reason, I’ve created this series, so that you level up your skills and really get the most from it.

In part one of this series, I’m going to take you through Composer’s command-line. I’ve cherry-picked a key subset of the command-line options, and focused in on key switches, so that you can do more than you already can.

I’ve decided to skip install, update, and require, as they’ve been covered copious times before. Sorry to disappoint if that’s what you were expecting.

Stuck For Time? Listen to the essentials of this post in episode 20 of Zend Framework Quick Bites

We’re going to start off with the create-project option. This one I didn’t know about for the longest time. But when I did, I was more than excited to start using. If you’re not familiar with it, you’re probably used to doing the following:

Note that I’ve passed the -s switch, with rc as a parameter to that. This indicates the minimum-stability level allowed. We could also have passed a number of others.

We could specify a working directory, other than the current one, using the -d or --working-directory switch. This can be helpful if you’re scripting up the process — or you just don’t want to cd somewhere, then cd back again.

We could avoid the package scripts running by passing the --no-scripts switch. We could prevent Composer’s output progress indicator from running, if that causes issues with the script we’re using to automate the process, by passing the --no-progress switch.

Interestingly, we can also prevent installation of the packages dependencies, by passing the --no-install switch.

This is, I find, a very interesting and helpful command. Sure, you can open up composer.json, but that’s not a scriptable process. So, instead use the show command. This, as the name implies, shows a host of information about installed and configured packages.

It provides the ability to list the installed packages, list information about the current package (your composer.json configuration), and more.

Ok, let’s say I’m curious, and want to know the names of the currently installed packages for my application. To do that, I’d run the following command:

This will print a sorted list of the names of the currently installed packages, similar to this:

How about getting a list of all the installed packages, with all their details? To do that, we’d instead pass either the -i or --installed switches. Doing that will show a listing similar to this:

Here, you see the name of the package along with its installed version, and the git commit hash. As there’s quite some overlap with the outdated command, which we cover later. So I’ll leave a more in-depth coverage of some of the commands until then.

Now what if I wanted to know all of the dependencies of the installed packages, whether that was another package or a PHP extension? This can be handy if you’re wondering why a package is installed, or just what it requires, without plumbing through copious composer.json files.

To do that, we’d pass the -t or --tree switch, which would give us output similar to this:

What if I wanted to know about the current package. To do that, I could pass the -s or --self switches, which for my application, would return the following:

We’ve seen in require and install how to add packages to a package. So it’s great that there’s an inverse command — remove. Remove, as the name implies, removes packages from your composer.json and then runs an update to remove the physical dependency (and in turn their dependencies) from your vendor directory.

As with install and update, remove can remove one or many packages simultaneously. So, say I had zendframework/zend-stdlib and sandrokeil/interop-config as dependencies. Here’s an example of how I could remove just one, or both, of them:

By default this only affects non-dev packages. So if you want to change development dependencies instead, then pass the --dev switch as well.

Now as Composer’s used in a range of situations, from setup to deployment some of the default actions may or may not be desirable. So, it’s good to know that you can customize the process a little, to suit your needs.

Ever tried to install a new package in an existing repository, but Composer’s not let you, complaining of a conflict? Perhaps you’ve seen output similar to that below and shaken your head, wondering how to fix it.

Here, I tried to install mcustiel/phiremock-codeception-extension, but one of its dependencies depends on a version zendframework/zend-diactoros.

This is further complicated because another package depends on a higher version of zend-diactoros. While the message helps debug the basics, it doesn’t help us track down the issue fully.

That’s where the depends option comes to the rescue. To find out which package also depends on Zend-Diactoros, I can run the following command:

This turned up the following:

Here, we see that Zend Expressive is the package that requires Zend Diactoros. That’s great. But why? Well, let’s go find out, by using the -r switch.

The -r or --recursive switch, recursively searches through the required packages and provides a path from the searched package through each successive package, showing all the packages which are involved. Here’s what it showed when I used the --recursive switch:

Here, I see that my package, which I’m developing, requires Zend Expressive ^1.0, which in turn requires Zend Diactoros ^1.1. Great that I know that, but it isn’t the easiest to read.

While text is great for computers, I find it a lot easier to read when it has some colour and formatting. Turns out there’s a switch for that as well: the -t or --tree switch. But re-running depends with one of the two, we get the output below:

Here, we see the packages which require Zend Diactoros, but in a much more readable way. When I found this, I never looked back.

Want to know which packages which your application uses that are outdated? Then the aptly named outdated option is for you. While a proxy to composer show -l it’s helpful in its own right.

Let’s run it in the package that I’ve been working on and see what it shows. I’ll run composer outdated, and the result is below, which I’ve truncated for readability.

While a little hard to read, it has the following format:

There’s a lot of information being shown. But it’s helpful if you really want to dig deep. To help out, the output of the latest version and commit hash, which you won’t see here, is color-coded.

If it’s green, you’re at the latest version. If it’s yellow, there’s an update available. If it’s red, there’s a new version available, which is semver-compatible, and you are advised to upgrade.

By default, you see everything, which isn’t always helpful. In my own case it was quite overwhelming. There are two switches which help us make sense of this; these are:

You know when you run composer require you often see a message similar to “This package suggest package X”? These are a list of packages which the package maintainers suggest that you use, but don’t enforce you to. How often do you pay attention to these?

How often do you wonder what they were, and want to find them quickly and easily? Sure, you can look through all the composer.json files, to find this out. But that’s tedious. The suggests command does it all for you.

Running composer suggests in my own repository, it suggested a large list, which includes the following:

As well as the other packages, they were printed out as you see them listed above. No duplicates, and sorted in alphabetical order for readability. How long would it take you to go through all the composer.json files and do that by hand, or to create a script to do it for you? Arguably, too long!

Perhaps though you’re not interested in every suggestion. Perhaps you’re just interested in the suggestions for a specific package, such as Zend Expressive. If that’s the case, then include that package (or those packages), like this:

Want to know why packages were suggested? There’s a switch for that. It’s the --by-suggestion switch. By adding it to the previous command, I’m shown the following output:

There, you can see each of the suggested packages, and why they were suggested. That makes it explicitly clear. Now you know why you would use them, and when.

Those were nine of Composer’s key commands, along with a series of command switches; ones which should help you make even better use of Composer than you already do.

If you want to know more, I strongly encourage you to check out the command-line section of the Composer manual. It’s filled with a wealth of great information.

Didn’t like my command choices and switches? Which ones would you have chosen? And why?