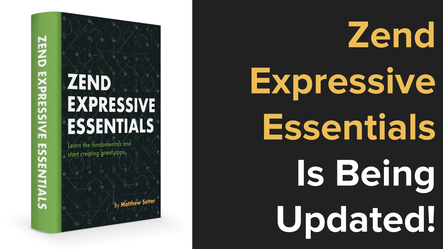 As Zend Framework is now rehomed at the Linux Foundation and has also been rebranded, I’ve decided to update my book and course on Zend Expressive. In this post, I’m giving some background about the journey of creating the book, insight into the progress I’ve made, and what lies ahead.

A couple of years ago, when I was actively running Master Zend Framework, I decided to write a book on Zend Expressive. The book aimed to be the guide to getting started with the, then, latest iteration of the framework.

It wasn’t intended to cover everything that you could know about the framework. The book was only designed to cover the essentials, yet also point the reader to more resources so that they could go further as and when they were ready.

It was a fun project in self-dateing a book, and to be honest, I couldn’t have been happier with how the book turned out. Okay, more sales are, generally, always a good thing, to be fair. But the process of going from idea to finished book that anyone can buy was exceedingly positive and rewarding.

However, about a year after I dateed the book, I moved away from using Zend Expressive regularly. Unfortunately, as a result of this, the enthusiasm and passion for maintaining the book began to wane. It became hard to justify maintaining something which I was no longer, regularly and actively, using.

That said, the book (and the framework) always stayed in my mind as something that I wanted to return to. Little by little, day by day, it pestered me. I started asking myself questions such as:

On the second point, please don’t get me wrong. If someone had a question, I did my best to answer them as quickly as possible. I was not ignoring questions from my customers. I just felt that I should have been keeping the book regularly up to date and that since I wasn’t, I was letting people down.

It was hard to feel that way for too long.

And to be honest, I still loved working with the framework (when I could) - more than any other that I had worked with before. It was around this time that the core team behind Zend Framework decided to rehome Zend Framework with the Linux Foundation. As a result of this decision, they decided to rebrand Zend Framework as Laminas (and Zend Expressive was to be rebranded as Mezzio).

What had been, for the longest time, a niggle to get involved again had now grown into a daily nag, which I could no longer ignore. After a late-night of weighing up whether I had the time or not, I decided to set time aside regularly! It felt terrific too.

I jumped back in to start updating the book, based on all that had changed since it had last been updated - including the Mezzio branding changes. To do that, I started looking at Mezzio’s changelog and source, which is the source of all truth. Then, I sent out a tweet asking about what had changed. I received a rapid and very authoritative response from project lead, Matthew Weier O’Phinney.

He said that, effectively, not a lot had changed, other than branding. This was very encouraging, as there likely wouldn’t be that much that had to be updated. Sure, it was going to be a bit of work - though I hoped it wouldn’t be as much effort as my friend Matthew Turland needed to invest when he updated one of his books.

Anyway, this has been a rather long and winding post, which I’ll now bring to a head.

How much progress has been made? 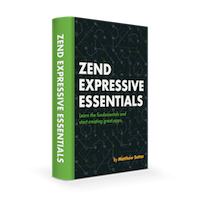 The updates to the book are about 70% complete. I expect the remaining chapters updated by the end of the month. It's going to have a new cover, which I'm planning to work with the previous graphic design agency on, as they did such an excellent job with the original cover.

Additionally, four wonderful - and very knowledgeable and experienced - developers from the Zend Expressive (Laminas) community have agreed to be technical reviewers for the book. I’m not saying who they are at this stage, but am very appreciative for their help and support. With it, I’m confident that the book will be written to the highest quality standard.

Once the book’s been updated, I’ll be updating the Pluralsight course that I created on Zend Expressive as well. I don’t have an expected completion date yet. But as updating a course (likely shooting all the video from scratch) will be a significantly more substantial investment than updating the book. It will probably be finished around the end of June (at this stage).

I’m looking forward to keeping the book, and the course, in sync with the framework as it changes over the next couple of years. Sure, these things take time and effort, but I’m confident that it will be a worthwhile investment and contribution back to the project that has given me so much.

Filed Under: updates  Tagged with: