Why Antora Is The Leading Technical Writing Platform 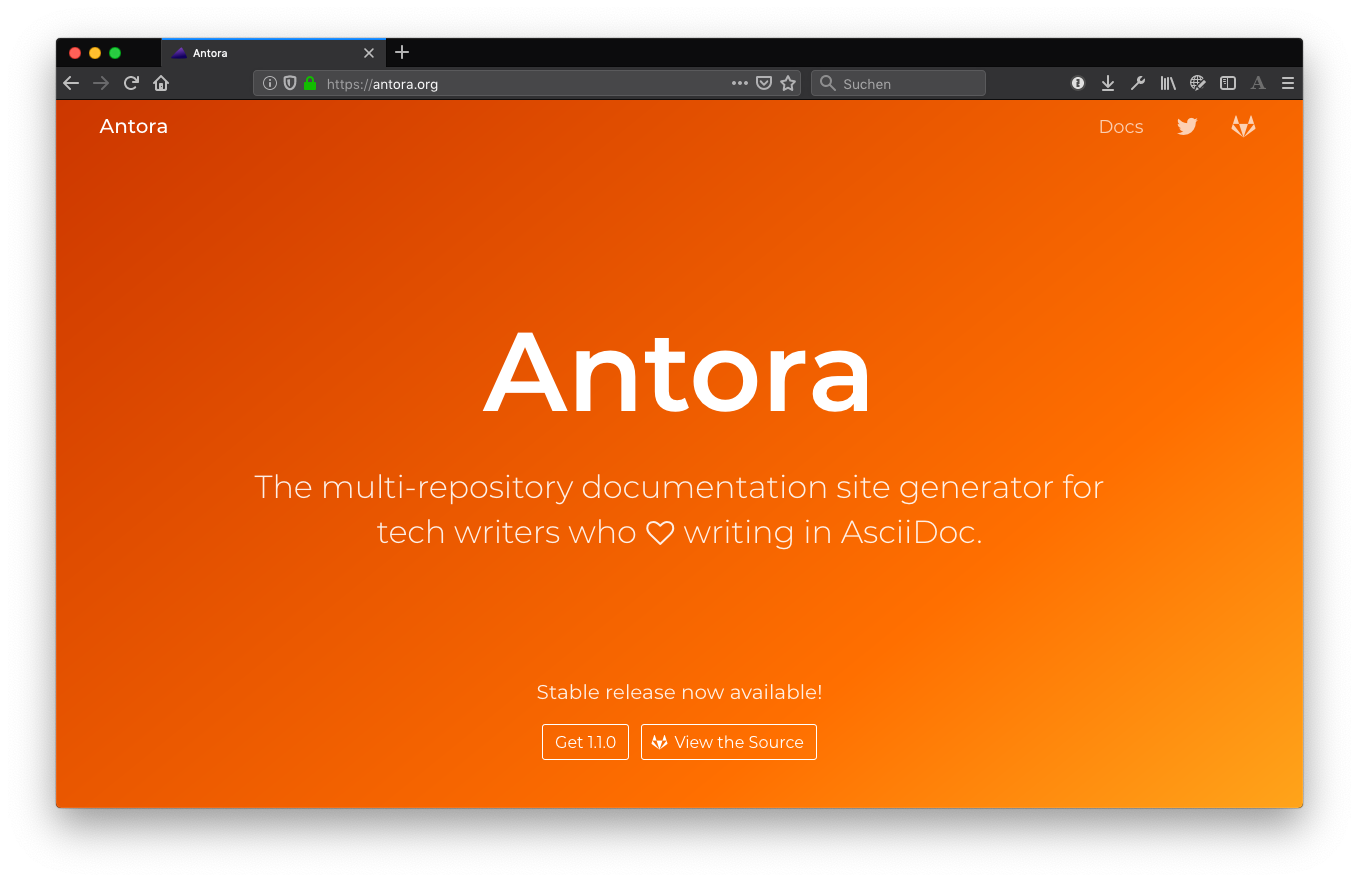 If you need to create and maintain technical writing, there are a large number of solutions that will give you a lot of what you want. However, which one is the best? Today, I’ll show you which one I believe is the best choice.

There are static site generators, such as Hugo, Sculpin, and Jekyll, general-purpose CMS’, such as Drupal, Wordpress, and learning management systems, such as Moodle. That said, these are general purpose tools, designed with other purposes in mind.

However, when it comes to platforms that have been specifically designed around the needs of technical writers and technical documentation, there are only two possible choices; these are Antora and Sphinx-Doc (Sphinx).

Sphinx is the older, veteran platform, and Antora is the up and coming competitor. Of the two though, speaking from personal experience, Antora is the better choice.

Antora is self-described as:

The multi-repository documentation site generator for tech writers who love writing in AsciiDoc.

While relatively new (currently at release 2.3.3), it’s already a very competent tool; one I expect makes developers’ lives much more comfortable than competing platforms. This is because Antora is: 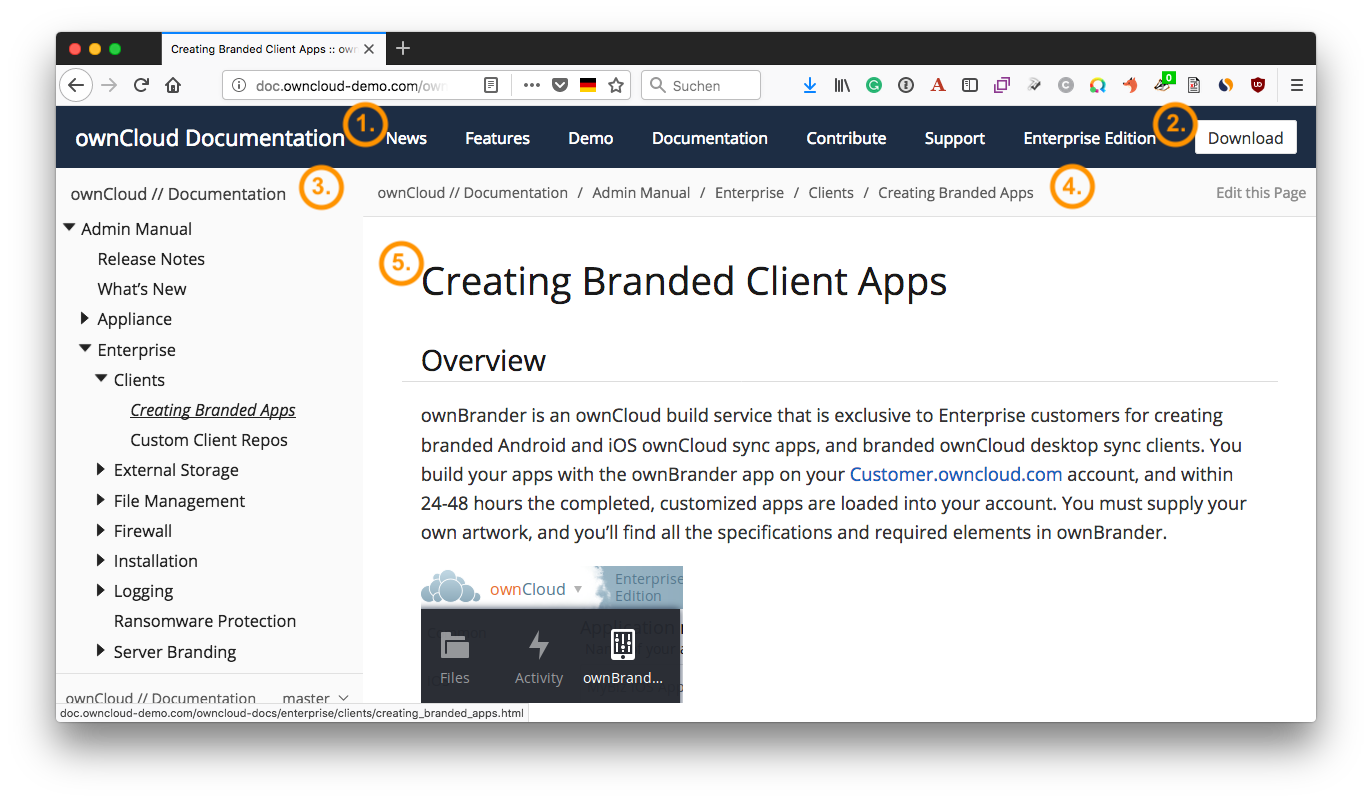 In the screenshot above, you can see an example of what Antora documentation looks like (using a slightly modified default theme). You can see that:

While not revolutionary, the layout uses well-recognized and understood navigation conventions. However, it has a rich navigational feature. Notice the link right at the bottom(5). If you click it, it opens up a sub-navigation menu. 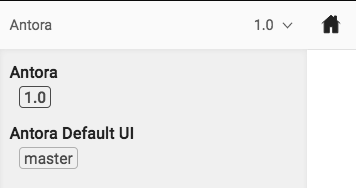 However, by taking advantage of this feature in Antora, that’s not necessary, thanks to this innovative feature. I expect that it makes users lives so much easier, as they’ll be able to navigate quickly to the version of the documentation that matches their ownCloud installation.

To quote the AsciiDoc Syntax Quick Reference Guide (which you should bookmark!):

If you look through the guide, you’ll see that it’s a file format which is quite similar in appearance to Markdown, supporting paragraphs, formatted text, headers, sections, section titles, lists, links, images, code, and tables.

However, that’s where the similarities end. AsciiDoc, being specifically designed for technical documentation, supports an extensive range of additional functionality, including:

What’s more, the format is consistent and predictable, as it has a definitive standard. This is in stark contrast to Markdown, which has a series of (often competing) standards, such as GitHub Flavoured Markdown, and Daring Fireball.

AsciiDoc is a robust, text-based file format, which you can use to create even the most sophisticated technical documentation, able to be exported to a range of modern file formats. Have a look through the quick reference guide, and the rest of the official AsciiDoc documentation to learn more.

DocBook is nice, but (like XML) it is not meant for editing nor for merging changes (by humans). Using AsciiDoc (which translates to DocBook perfectly) is a much easier way of developing. - Dag Wieers.

How Do You Write & Edit AsciiDoc Files?

To write AsciiDoc, you only need three things; these are:

Let’s step through each one.

Just like writing in any other format or computer language, you’re going to need a text editor or an IDE. And as you’re a developer, you’ll already have one, and it likely supports AsciiDoc already. If not there should be a plugin available for it. Here are some of the text editors and IDEs that we recommend. 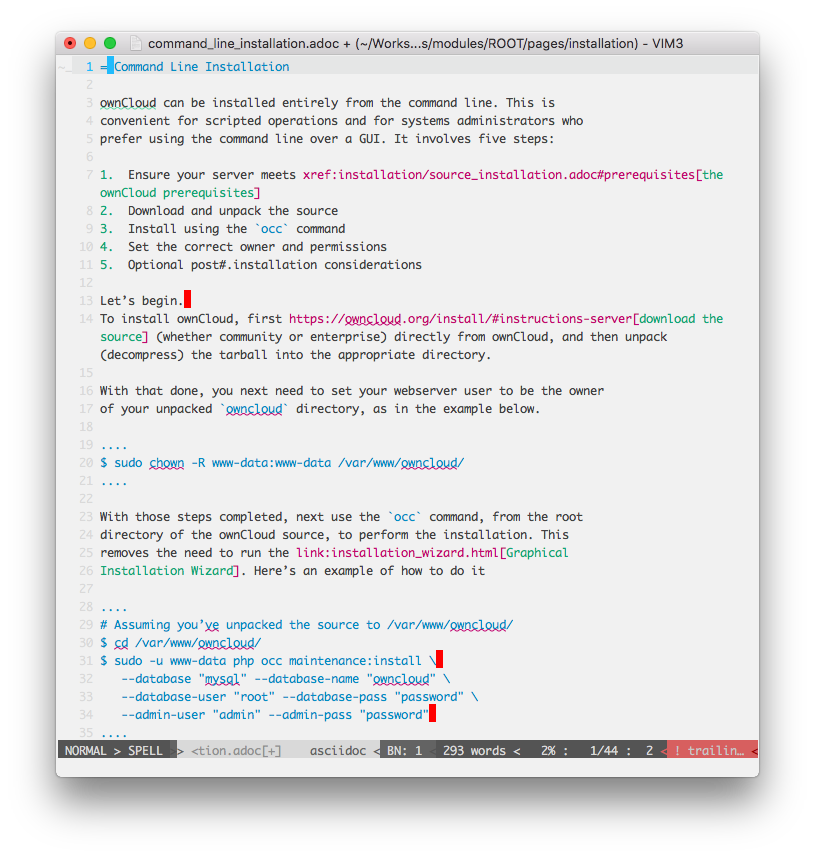 Alternatively, if you want both of these, plus some extra setup ready to go, you can use the Vim for Technical Writers repository. The repository has a .vimrc file that installs both plugins, enabling them only when editing Asciidoc files. 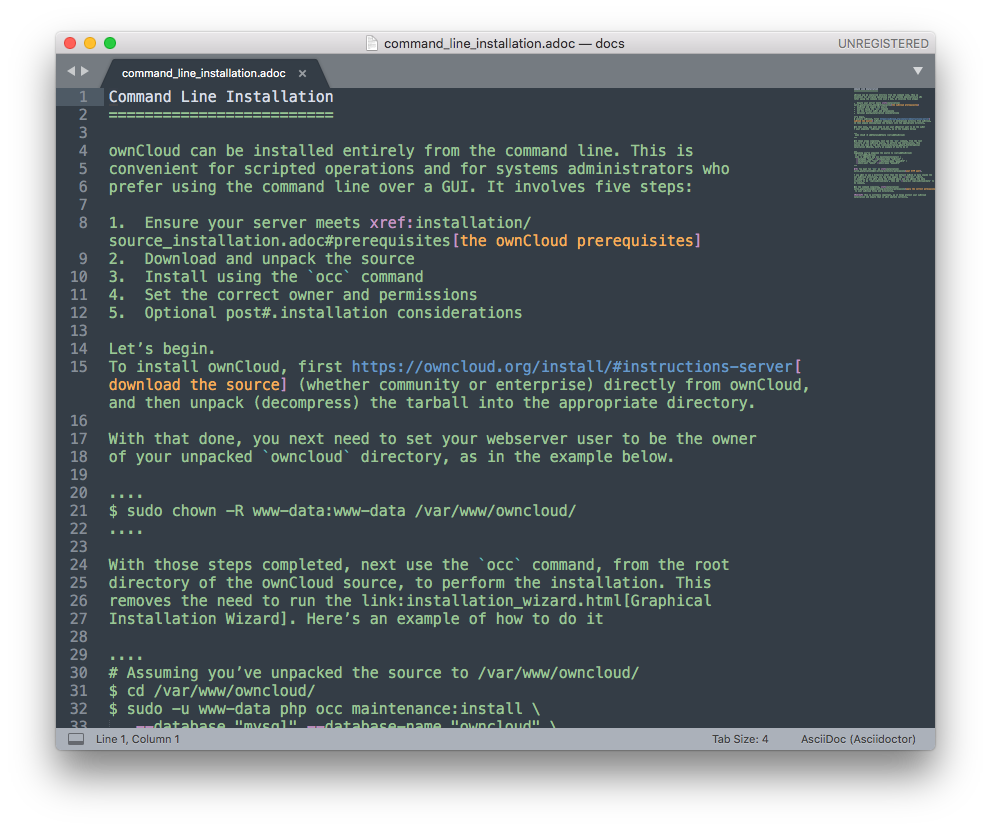 SublimeText doesn’t come with native support for AsciiDoc, but you can install the AsciiDoc package which provides it. Once you do that, you’ll have a range of AsciiDoc editing functionality available, including:

In recent months, Atom’s been gaining significant traction. Written primarily by the team at GitHub and supported by a massive community around the world, and packed with a wide range of features out of the box, it’s easy to see why.

If it’s your text editor of choice, install the asciidoc-assistant package. This package is a meta-package that takes care of installing a range of plugins, which to give you full AsciiDoc support. 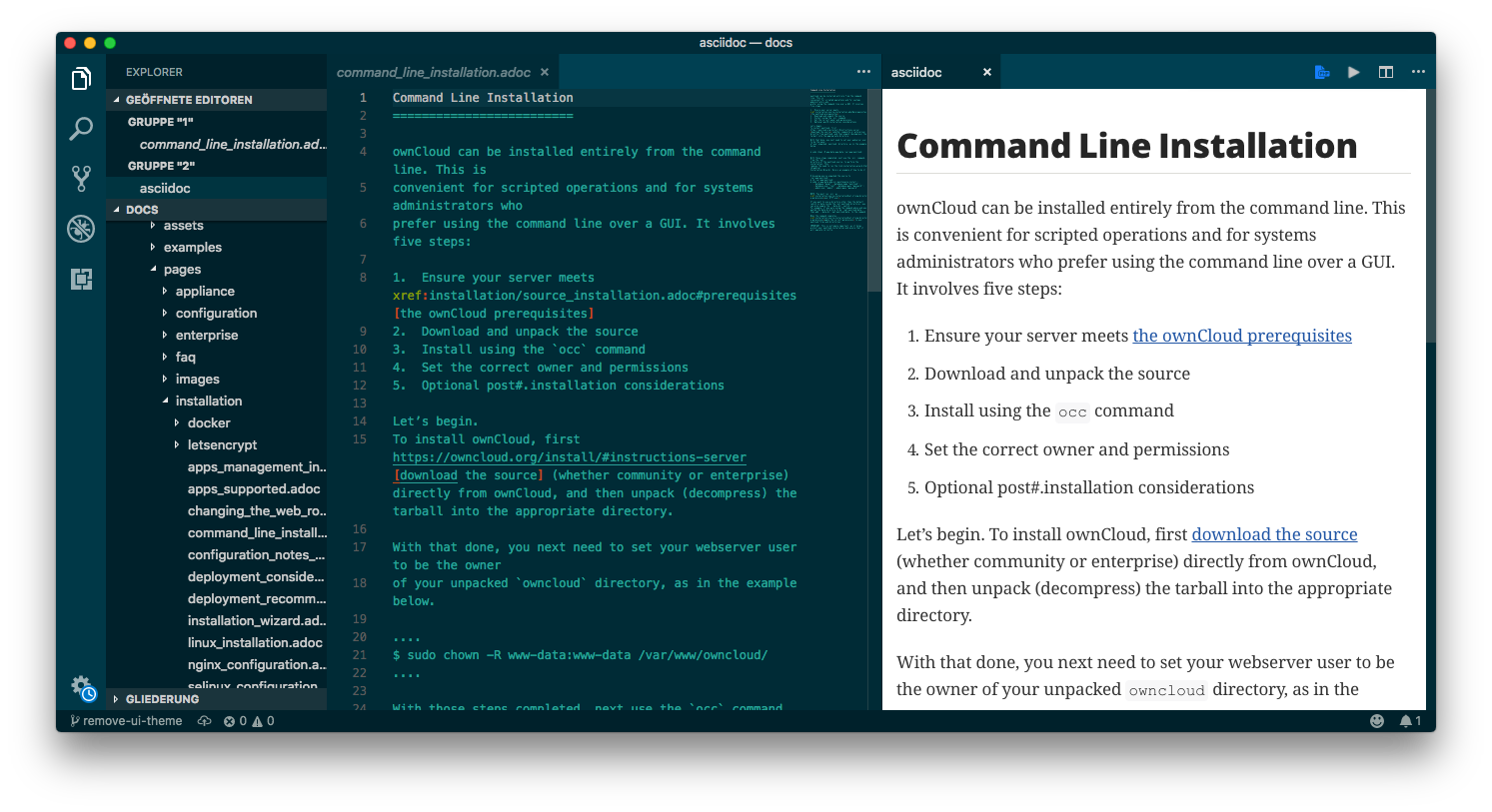 If you’re on the Microsoft Windows platform or love the Visual Studio environment — and in particular the new VS Code editor/IDE — then you’ll be happy to know that it supports AsciiDoc as well. If you install the AsciiDoc plugin, then you’ll get some basic functionality, including: 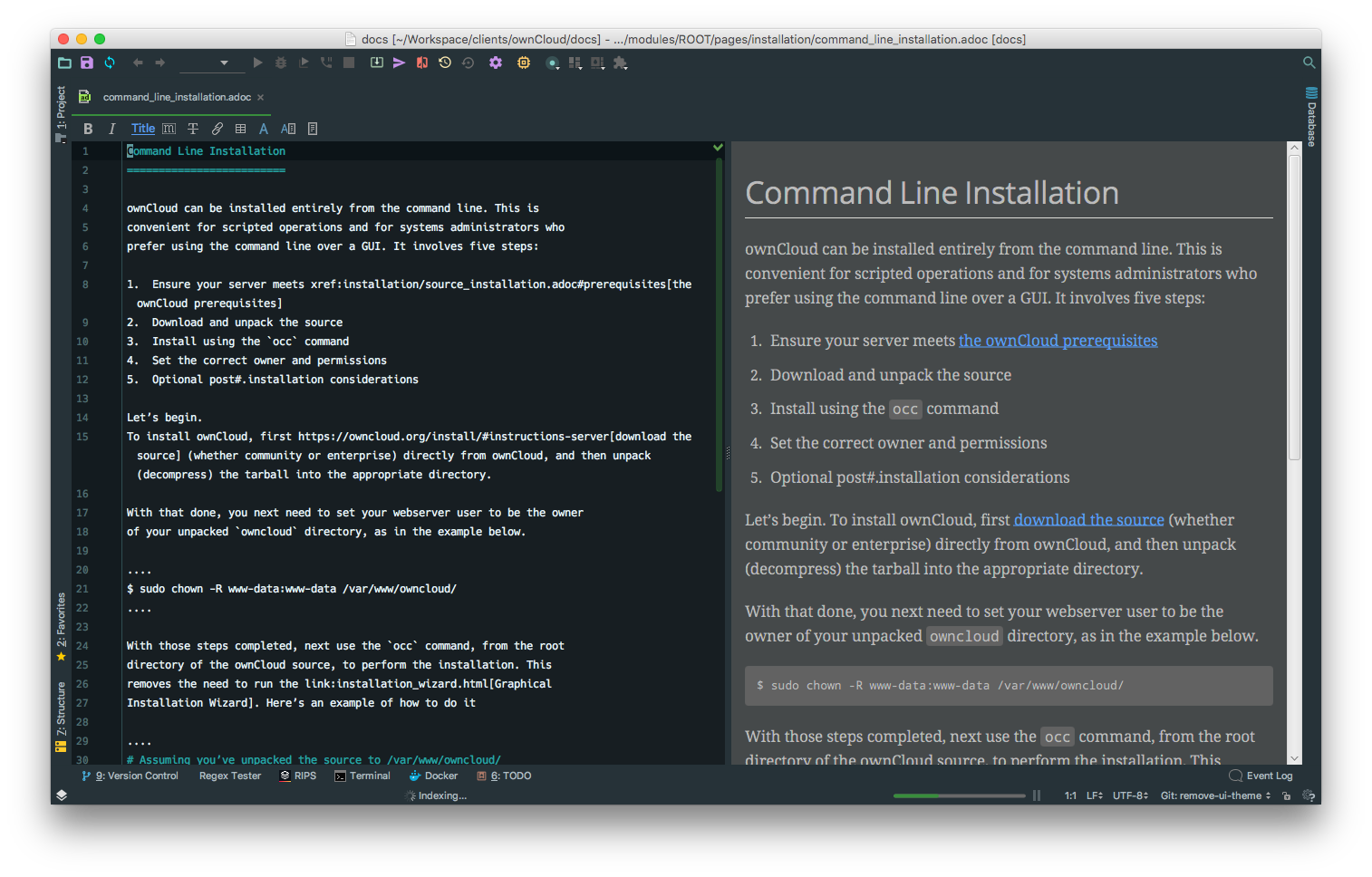 If you’re a fan of IDEs over text editors, in particular, the JetBrains IntelliJ platform, then make sure you install the AsciiDoc plugin, available, from the JetBrains repository.

It provides a minimal set of functionality when editing AsciiDoc files, which includes:

Another Text Editor or IDE

If you’re not already using one of these text editors of IDEs, don’t feel the need to change to them, just because they’re what we recommend. It’s possible that your existing text editor or IDE already has an AsciiDoc plugin. And it makes far more sense to continue using what you already know, instead of learning an entirely new tool.

Once your text editor or IDE is ready to work with AsciiDoc then, assuming it doesn’t already support previewing AsciiDoc, you’ll need a way to preview the changes you’re making to ensure that they render as you expect.

As with anything of a technical nature, you need documentation, because there’s going to come a time that you will need to refer to it. So too with AsciiDoc. Here are a set of links to documentation that you can bookmark and use on a regular basis:

How Do You Install Antora?

Installing Antora on your local development (virtual) machine doesn’t take too much time, based on whether you install the tools directly, or use the official Antora Docker container.

Please note: if you want to make text changes, then installing the AsciiDoc Live Preview Plugin, whether as a Browser plugin or as part of your text editor or IDE, may be sufficient for your needs.

Use The Docker Container

If you’re looking for the most straightforward path to making Antora available, so that you can build the documentation and preview the documentation locally then, assuming that you have Docker already installed, run the following two commands.

After the commands finishes executing, you’re ready to build the documentation. You can find out more about Serve in the official NPM documentation.

To install all the Antora tools on your local machine will take a little bit of time and effort. Before you get started, make sure that your development machine is one of the supported hardware platforms.

After that, install the system requirements for your platform, whether that’s Linux, macOS, or Microsoft Windows. These include the base build tools, Node 8, and NVM. With that done, you’re now ready to install Antora’s two command-line tools; these are the Antora CLI and the default Antora site generator.

With the dependencies and Antora tools installed, you’re ready to build the documentation locally.

How Do You Build the Docs?

Let’s assume you’ve made a change to some aspect of documentation, whether large or small, and you want to rebuild the docs and preview the changes. There are two ways to doing so, depending on how you installed Antora.

From the command line, in the root of the docs directory, run the command:

This command starts up the Antora Docker container, removes the existing documentation, and then runs Antora’s generate command, and regenerates the documentation. If all goes well, you will not see any console output.

Running Antora From The Command-Line

From the command line, in the root of the docs directory, run the command:

If all goes well, you will not see any console output.

If an aspect of your change contains invalid AsciiDoc, then you’ll see output similar to the example below.

There, you can see:

How Do You View Generated Documentation?

Assuming that there are no errors, the next thing to do is to run the NPM Serve tool so that you can view your changes, before committing and pushing the changes to the remote docs repository. We suggest using it, as it’s trivial to install and start. You could also use PHP’s built-in web server as well. By using either of these, you don’t have to install and configure a complete web server, such as Apache or NGINX.

This starts Serve and set it running in the background, using the public directory, (re)generated by antora antora-playbook.yml, as the document root, listening on http://localhost:5000. The URL is automatically copied to the clipboard. 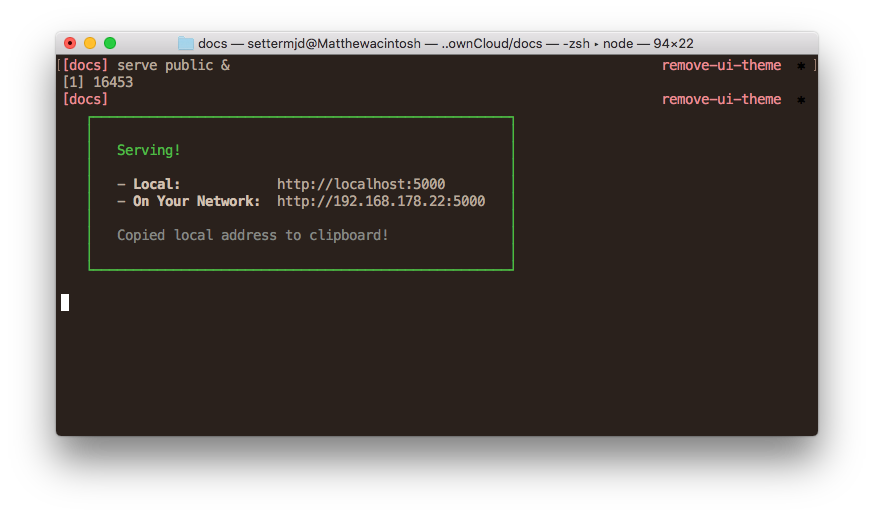 Open the URL in your browser of choice, and you’ll see two links, as below.

Click “server/”, and you’ll see the local copy of the documentation. 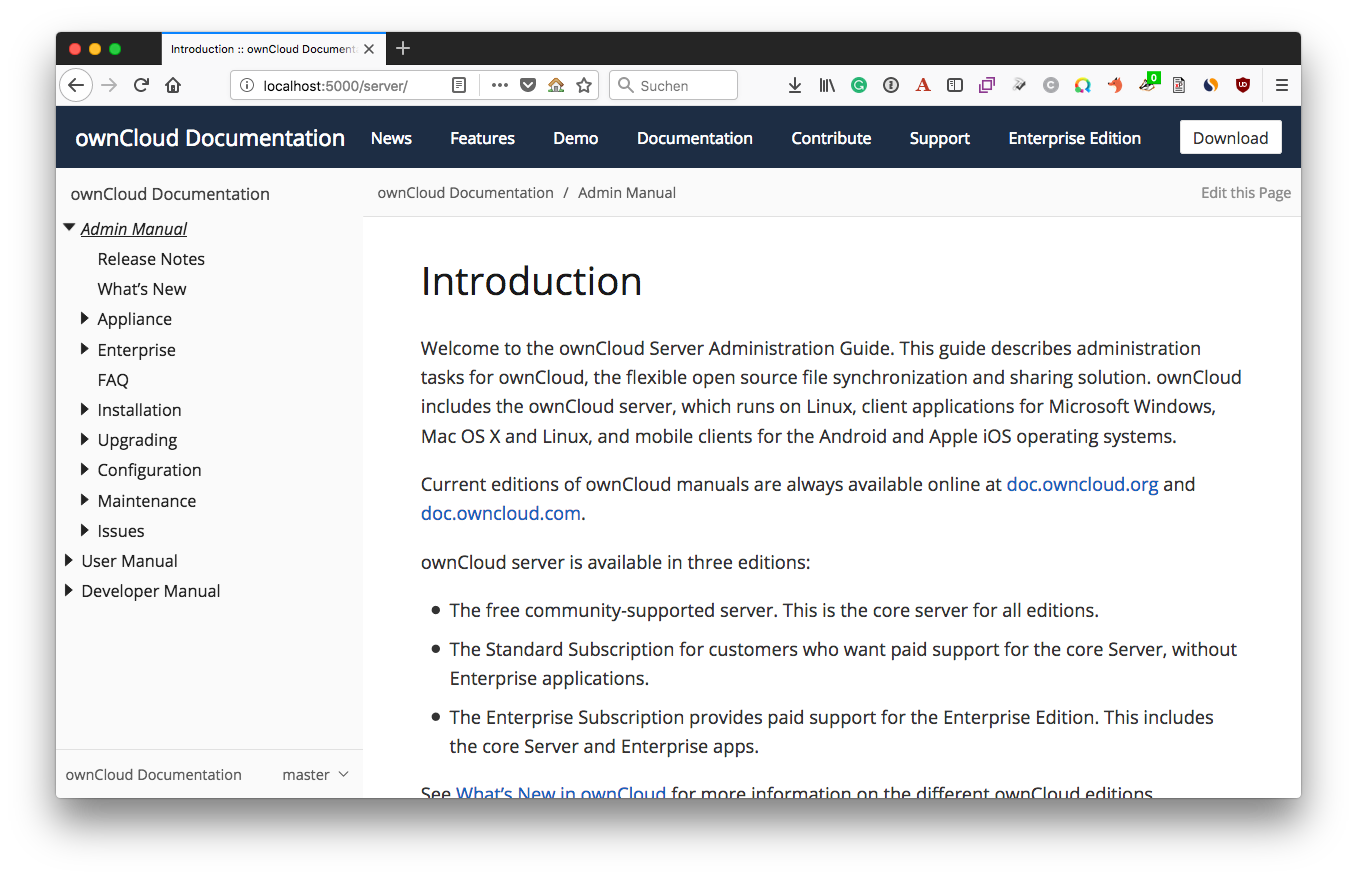 If you’re happy with your changes, as with any other change, create a set of meaningful commits and push them to the remote repository. If you’re not satisfied with the changes, however, continue to make further updates, as necessary, and run antora antora-playbook.yml afterward. Your changes will be reflected in the local version of the site that Serve is rendering.

We hope that you can see that contributing to the documentation using Antora is a pretty straight-forward process, and not that demanding.

If you need to create and maintain technical documentation, Antora, while still young, is the solution with the lowest barrier to entry, the most straightforward file structure, and the most flexible and well-designed underlying file format.

Yes, you could use alternatives, such as static site generators, general-purpose CMS’, and knowledge management systems. However, these are general purpose tools, designed with other purposes in mind.

In my opinion, there are only two platforms that have been specifically designed around the needs of technical writers and technical documentation. And of those two Antora is the best.

What’s your opinion? Do you love a different platform?