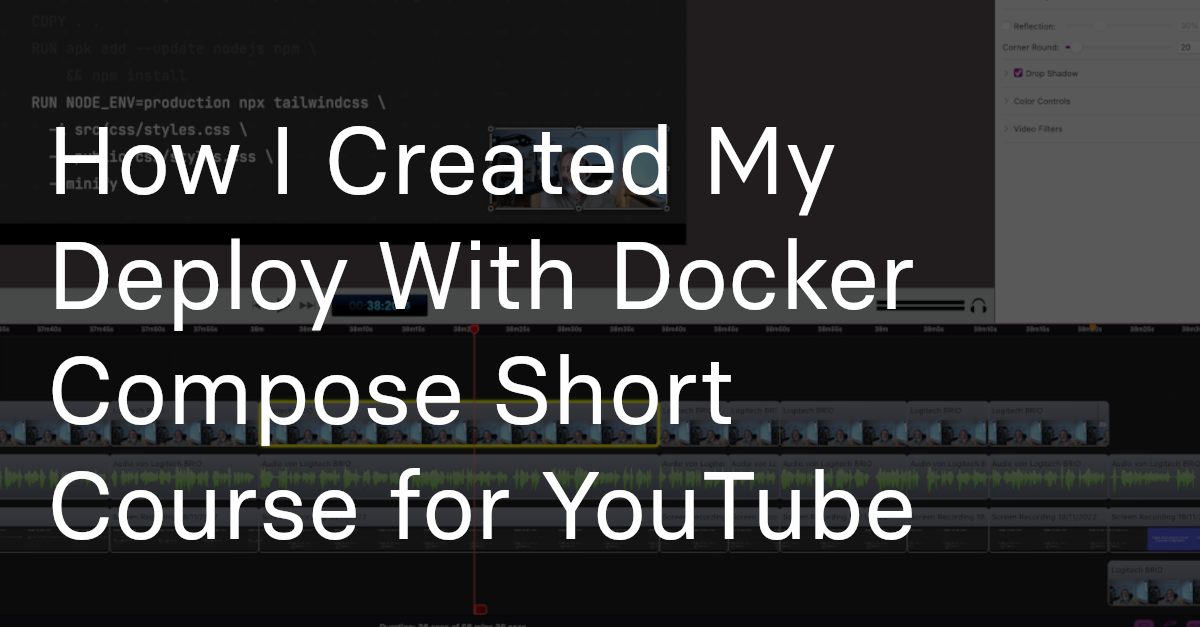 Yesterday, I published a short course on deploying with Docker Compose to my YouTube channel. In this post, Today, I’m stepping through what it took to create the short course, from start to finish.

I recorded the talk and myself as a talking head 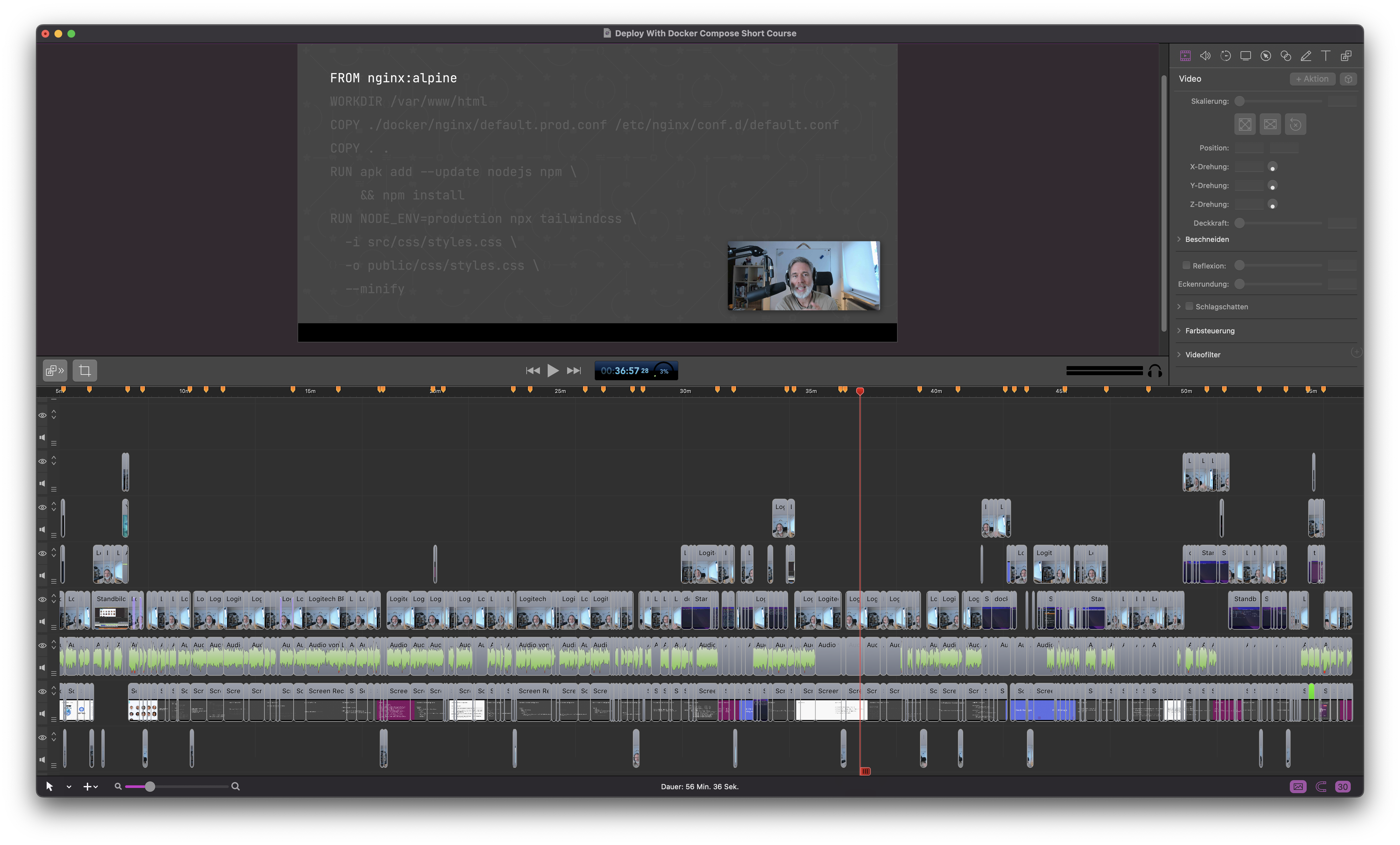 While I’ve been using Davinci Resolve for video editing (on Linux) over the last couple of months, it wasn’t the right choice for this project. I used Screenflow 9 instead.

There were two key reasons for doing so.

Firstly, the slide deck which forms the core of the course was created in Apple Keynote. Sure, LibreOffice does open Keynote files, so I could have run through the presentation on Linux, however attempting to do so is, let’s just say, less than desirable. Have a look at the three screenshots below and tell me if you think they look professional.

Now compare that with how it renders in Keynote, below. 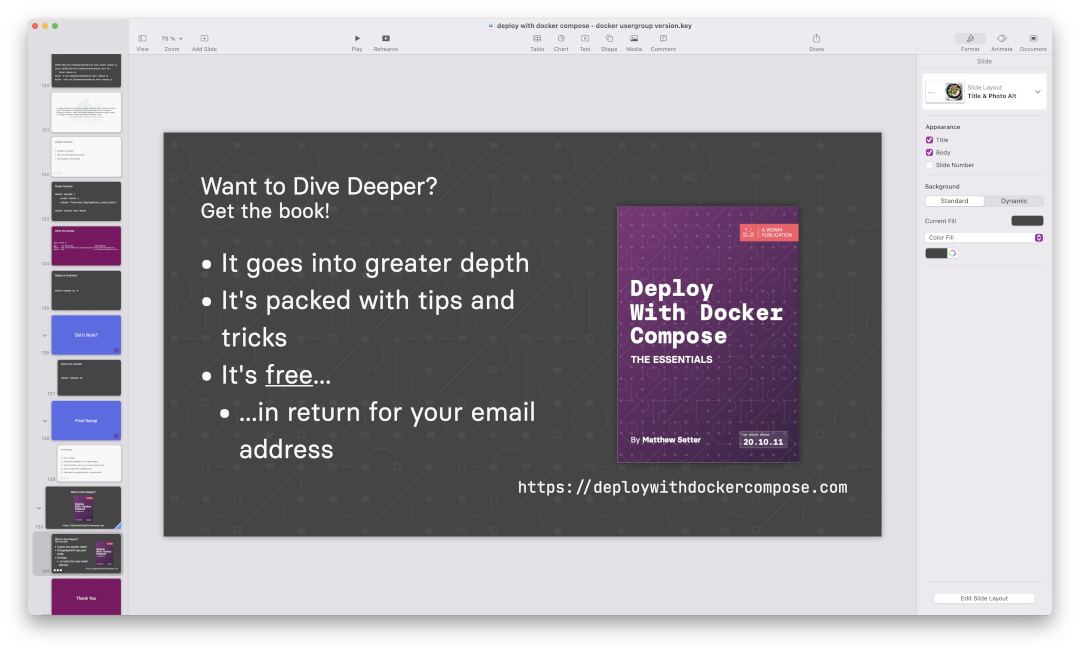 Perhaps if I’d created the slide deck directly in LibreOffice, it would have rendered as expected. Regardless, it’s something learned for the future. On a side note, another option I’m considering exploring for future presentations is Reveal.js, an open source HTML presentation framework. But more on that another time.

Secondly, Screenflow is perfect for this kind of scenario (and Davinci Resolve doesn’t record your screen). To create the source material, I started the presentation in Keynote then started a new Screenflow recording session. All I needed to do was tell Screenflow to record my webcam, my main screen, and to record my voice from my main microphone.

This is one of the reasons that I don’t exclusively use Linux. While I love Gnome Shell and use it for over 90% of my daily work, sometimes macOS is the right choice.

That said, in the future, I’d like to record more content in Linux. But, so far, I’ve not done a lot of screen recording on Linux. Given that, I’m not quite sure what combination of software I’d need to record an equivalent session.

A third reason is that I’m quite experienced with Screenflow (up to version 9), as I’ve created a number of online courses using it over the last 5 or so years. Given that, I have a lot of muscle memory that helps me use it quite efficiently.

Back to the recording process. I then stepped through the presentation from start to finish, re-recording parts where I flubbed the audio or where I ad-libbed some points but which made little to no sense. In the screenshot below, you can see just how many cuts I’ve made, which should give an indication of how much content fell on the cutting room floor.

Did I mention that the just over an hour recording in Screenflow weighed in at 29 GB. That’s a lot of data! It’s at moments like this that I’m glad that I invested in a proper NAS with terabytes of space, so that I can back it all up.

Regardless, now, I was then ready to clean it up in post-production.

I cleaned up and polished the presentation in post-production

If you’ve ever created a course (say for Pluralsight), or a video of any length to be shared on YouTube, Vimeo, or Wistia, etc, then you’ll be familiar with post-production. It’s when you remove the ums, ahs, errs, multiple bad takes of some section of text, empty space, mouth noises and so on.

It’s also the time when you add in effects, text overlays, and, sometimes, many other cool parts of the presentation. While it’s essential for a polished recording, and can be fun, it can also be tedious. For this course, however, I only did the following:

For the first time – ever – I didn’t have to touch the audio.

I left the audio as it was

This might sound strange if you’re used to doing lots of audio clean-up work. It used to be quite a tedious task until I had sufficiently mastered Audacity. However, I don’t have to do that any more.

Howver, some months back, I bought a dbx 286s microphone processor, which you can see above, thanks to advice from my content creation mentor Shawn Hesketh.

If you’ve never heard of the dbx 286s, it’s a magical box that makes your source audio sound so much better than it normally would. For example, it can:

Sure, it costs around €180 or $275 USD new, and I was slow to buy one. But if you’re creating enough content, I feel that it’s well worth the investment. Why? I no longer record my audio and then post-process it in Audacity. As I have the 286s configured it as I need it, I talk into the microphone and the audio comes out nice and clean. There’s precious little, if any, audio post-production in Audacity that I now need to do. This is an incredible time-saver, as you’ll likely appreciate.

I added in demos and overlayed my webcam

While I’ve refined the core presentation while delivering to 10 user groups, watching a slide deck for any length of time – regardless of the fact that I’m speaking enthusiastically – can get a little monotonous.

To help alleviate this, I sought to give the short course more energy and engagement in three ways.

1. Adding demos, where it made sense 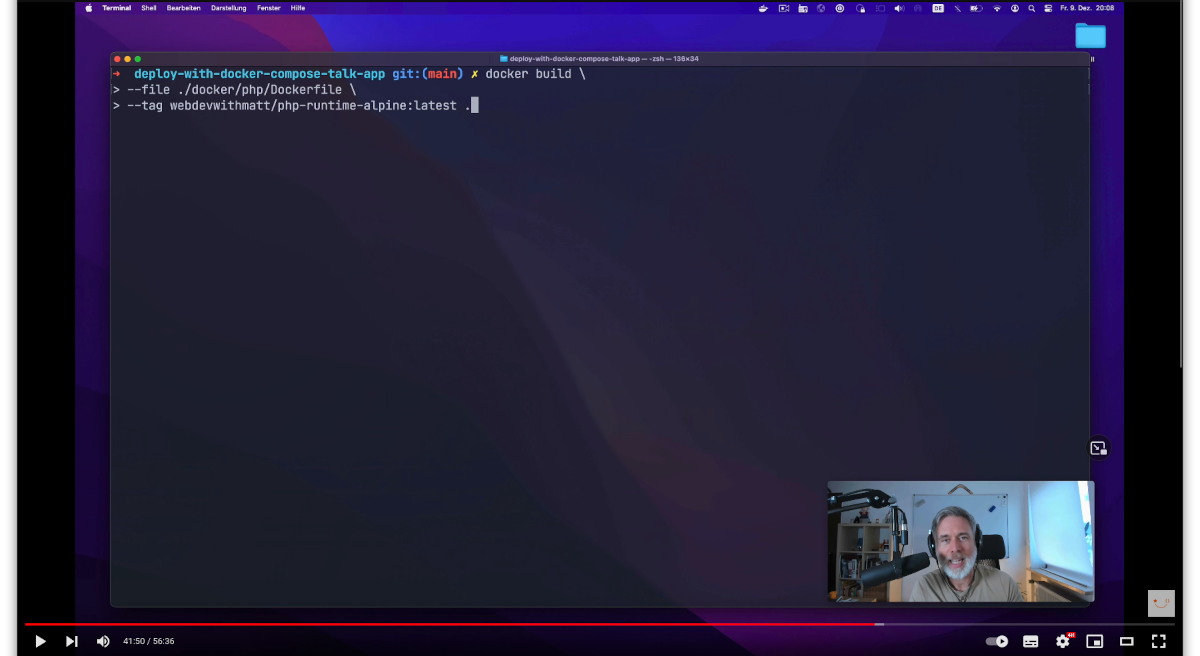 For example, if you skip to 41:49, you can see me building an image. At 43:04 you can see me listing a series of images in the local Docker image cache. I feel that, while I created the demos after the recording the demos still made the talk more interesting.

2. By overlaying the recording of me from my webcam

I overlayed my webcam video so that you see my face and hear my voice. I’m not visible throughout the entirety of the short course. That’d be too much of a good thing 😊. But seriously, it wouldn’t make sense, and each section has a slide to introduce it, so that it’s clearer as to where sections start.

The video overlay is mostly displayed on the lower right-hand side, but not always. Sometimes, based on the current slide or the demo, it might not make sense to do so. In those cases, I moved it to a more appropriate position. 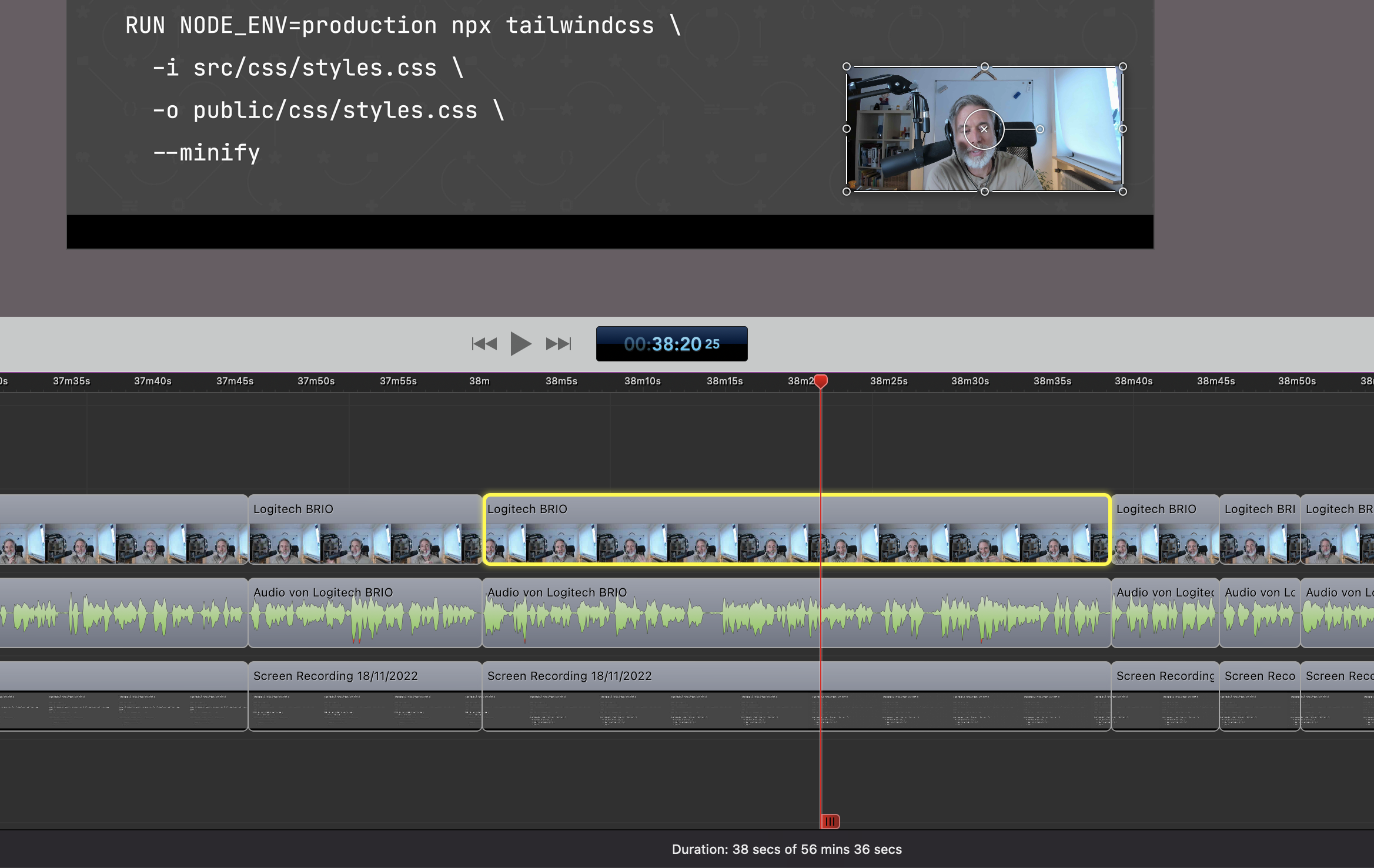 Screenflow makes it pretty trivial to layer one video (or clip) over another. Similar to image manipulation software, such as Gimp, Pixelmator, or Photoshop the uppermost clip (or layer) is at the front, with each successively lower clip/layer being behind the one above it.

I experimented with where the clip seemed to make the most sense, then created a preset. That way, I could select all of the relevant clips, apply the preset and know that they’d all be in the same position throughout the short course.

This was added to clearly show the URL for Deploy with Docker Compose, which was on the screen at the time. The motivation for this was that the URL bar was quite small, making the URL easy to miss, and I only spoke the URL once. The text overlay had a soft background so that the text was easy to read, regardless of what was in the background behind it. 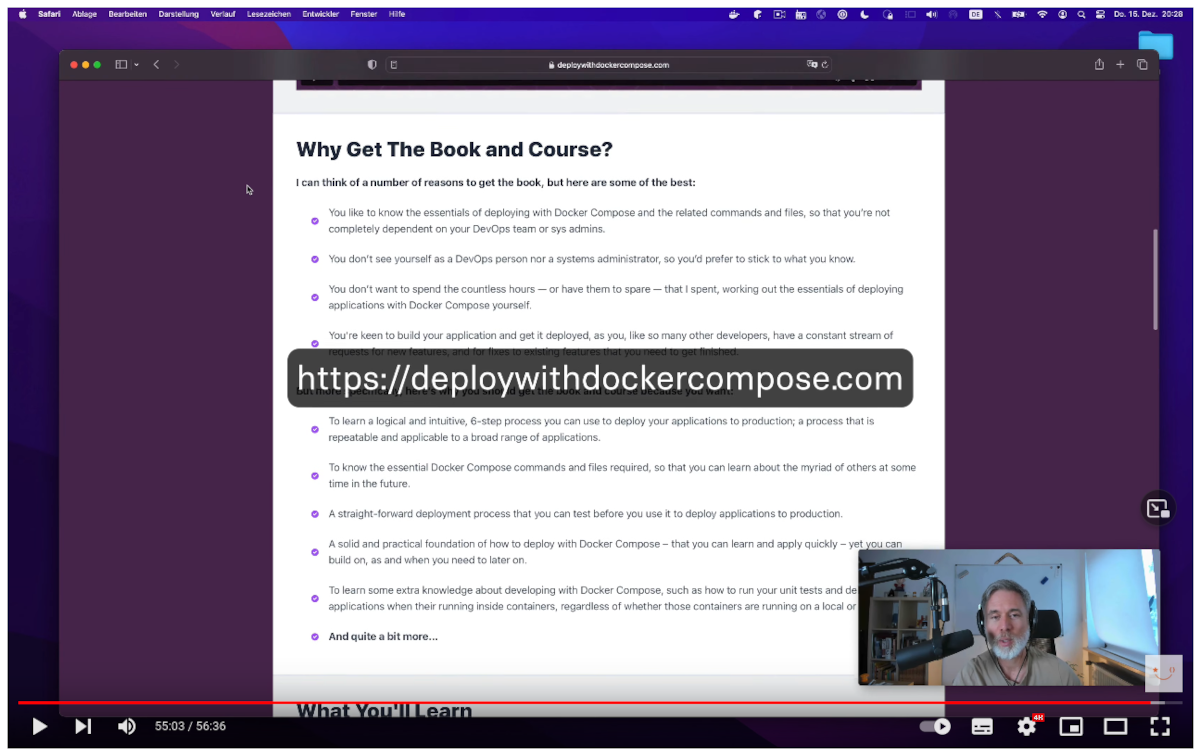 I don’t really add too many overlays or effects to my videos and courses. I’m a big believer in the old adage of "less is more" and that if you add too much of a good thing, you can ruin the entire work. Where effects make sense, I’m fine with using them. But nowhere else!

Like so many other video applications, Screenflow offers a host of effects, such as annotations, callouts, video, audio, and mouse/pointer effects. But I didn’t see the need for the majority of them in this case.

This was virtually a no-brainer, as in addition to a dedicated export functionality, where you can choose down to a granular level how you want to export your video, Screenflow also offers custom exports designed specifically for YouTube, Vimeo, Google Drive, Wistia, and more.

Step by step, I clicked File › Publish to › YouTube…​ and authenticated to YouTube, as the previous session had logged out. I accepted the defaults in the first step (above) as they suited the project.

Then, I filled in the category, title, description, tags, thumbnail, and visibility settings in the second step (above) and clicked Publish. Each field is required.

Then, a little while later, owing to the size of the video, it was uploaded to YouTube. The entire process was pretty trivial. Thanks, Screenflow!

Primarily thanks to the ease of use of Screenflow and the time saving that the dbx 286s gives me, as well as prior experience creating courses, creating the short course was a pretty straightforward process. While I’m always on the lookout for new ways to improve, refine and simplify my process, this is where I’m up to.

I appreciate that I didn’t cover the design of the course, or creating it in Keynote. What I wanted to focus on was the creation of the short course from the completed presentation. If you’re interested in actual course design, let me know in the comments. If there’s enough interest, I’ll create a dedicated article stepping through how I do that.

Do you create online courses? What’s your approach? Please share it in the comments. I’d love to learn from you as well.

Filed Under: Online Courses  Tagged with: